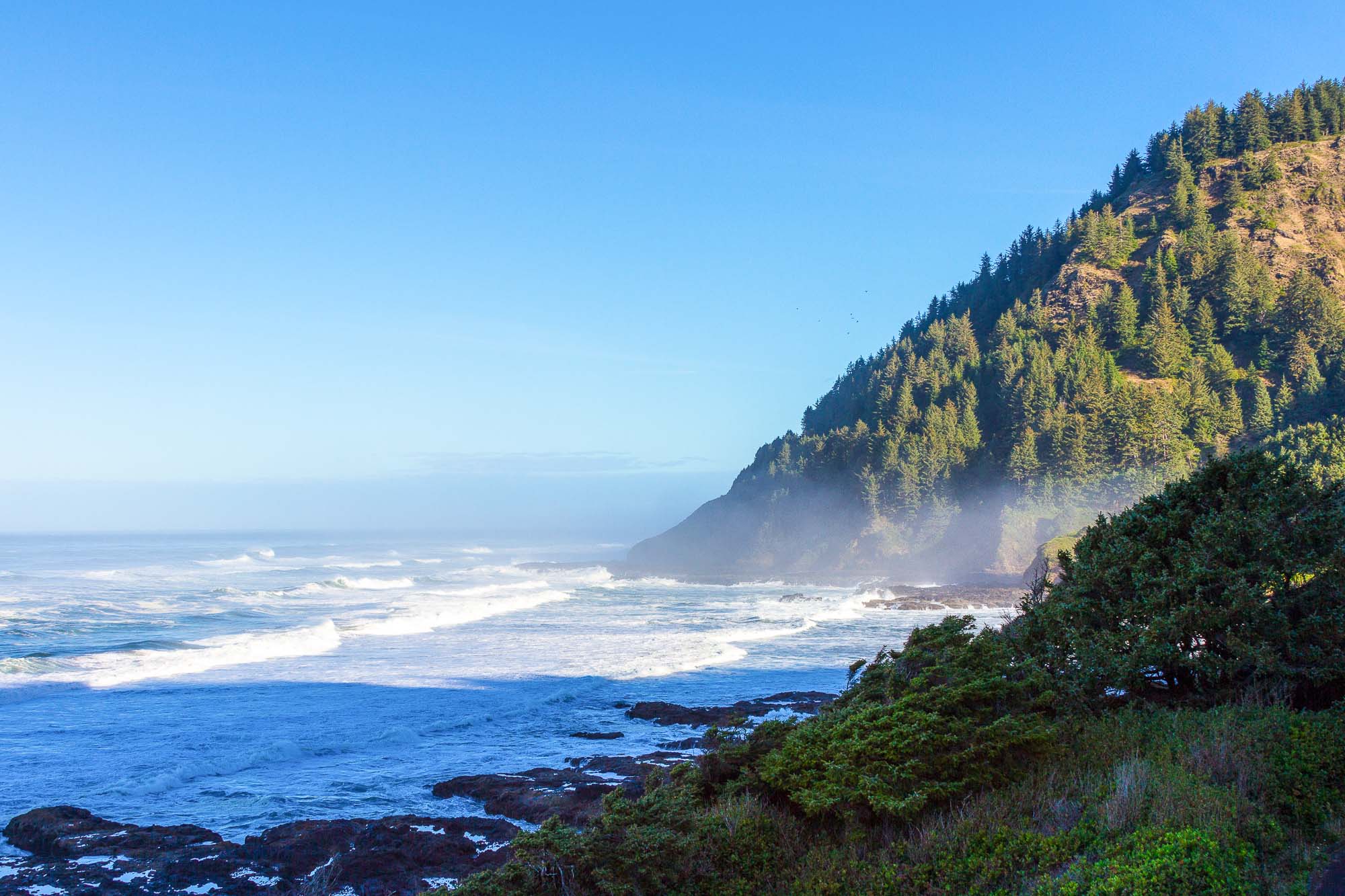 Highlights Along On The Oregon Coast

When one drives along the Oregon Coast you will notice a many state parks and recreation sites along the Peoples Coast. These areas are the perfect place to get out and explore all that the Oregon Coast has to offer. Lets take a look at some of our favorites areas along the Central Coast. We will begin our journey around Lincoln City and head south to Florence. Hopefully you get to see them during your travels but if you don’t, that just means you’ll have to come back again!

D River State Recreation Site– Every June and October the air above the beach is filled with kites as D River is home to two of the largest kite festivals. D River is also claimed to be the shortest river at a mere 120 feet long. 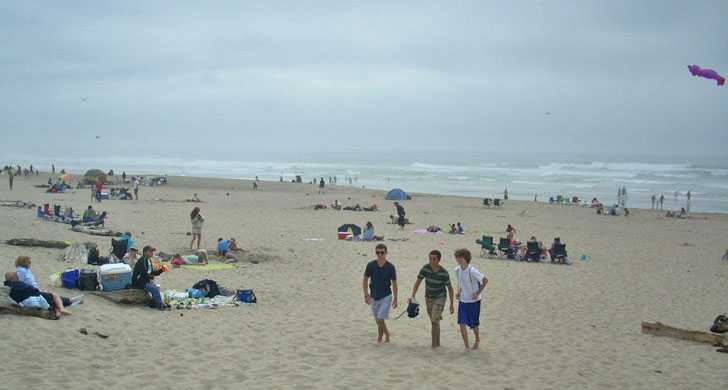 Boiler Bay State Scenic Viewpoint– Surrounded my craggy basalt formations Boiler Bay is a great location for bird and whale watching. At low tide, look for a glimpse of the boiler from the  the vessel J. Marhoffer that sank after an explosion in 1910.

Depoe Bay Whale Watching Center– The name says it all! It doesn’t take long to realize why Depoe Bay is the proclaimed whale watching capital of Oregon. Year round whales can be viewed in here along the lava rock shoreline. 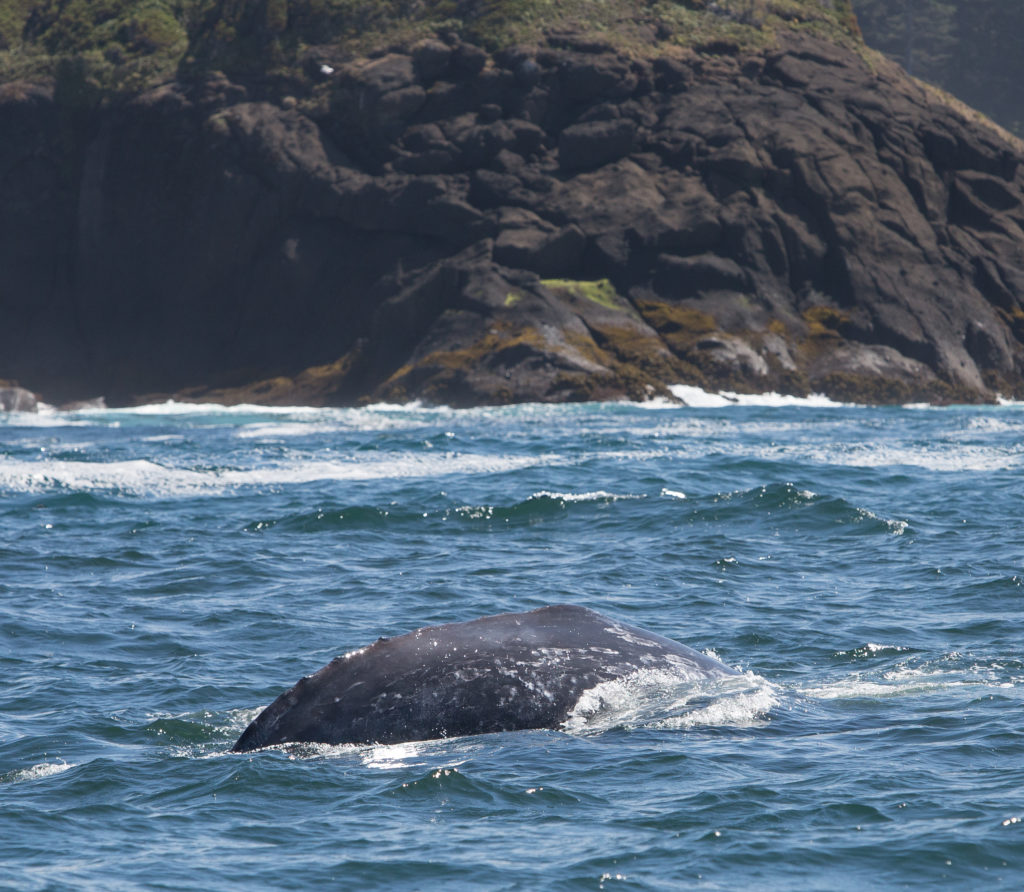 Devils Punchbowl State Natural Area– The rock formation at Devils Punch Bowl is a great place to watch any time of the year but especially exceptional during high surf. Watch as the water rushes to fill up the punch bowl like formation through an opening in the area. This area is also a popular place to learn how to surf. Grab a board and take a lesson with the local surf shop 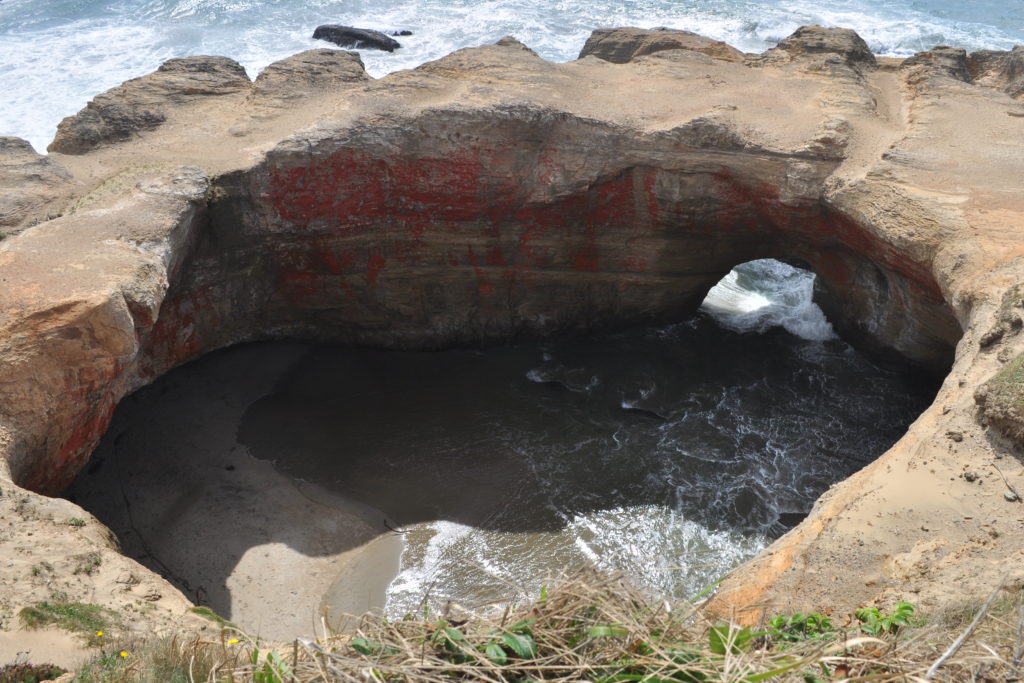 South Beach State Park and Jetty– Offering a little bit of everything, surfing, horse access, scuba diving, fishing and clamming, this area is an underrated gem on the Central Coast is also the perfect spot to watch the ship set off into the Pacific.

Smelt Sands State Recreation Site– This small pebbled beach is home to a yearly smelt run and has some amazing tide pool opportunities. Its just a short walk from the heart of Yachats along the 804 Trail to this other underrated site. 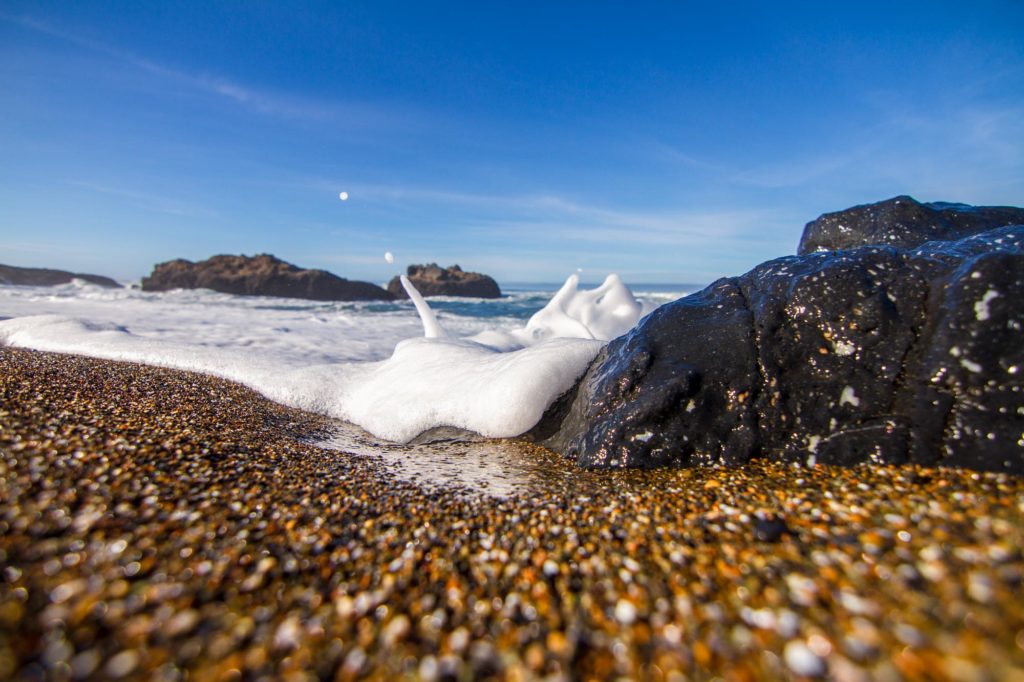 Yachats State Recreation Site– Pull up the car and watch for whales and waves in the Yachats’ River Bay. Sea Lions and seals can be seen bobbing along in the bay.

Cape Perpetua– Stop by the Cape Perpetua Visitor Center, open seven days a week and learn more about this area full of amazing natural sites. A few of the great places here are Devil’s Churn, Thor’s Well, The Cape Perpetua Overlook. Be only the lookout for Whale Spoken Here signs at Thor’s Well parking area and stop in for assistance and information on whale spotting. 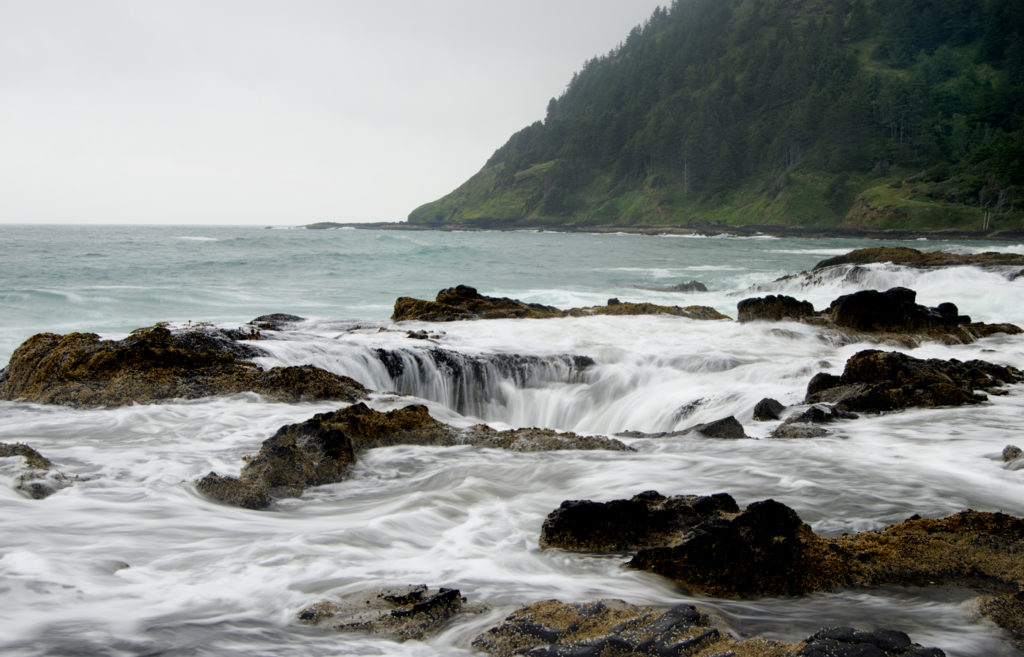 Haceta Head Light House– At 205 feet above the ocean, this lighthouse is said to be one of the most photographed lighthouses in the United States. It is also the brightest light on the Oregon Coast and can be seen 21 miles out at sea. 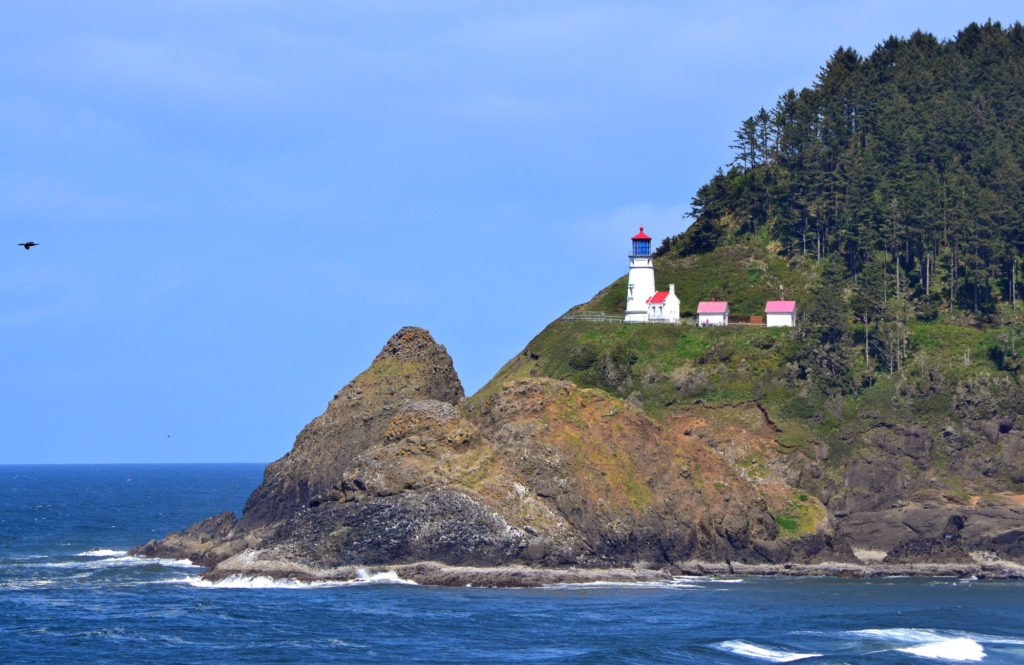 Sea Lions, bigger than the other sea lion that inhabits the Oregon Coast, the California Sea Lion. Sea Lion Cave is the also the largest sea cave in America. 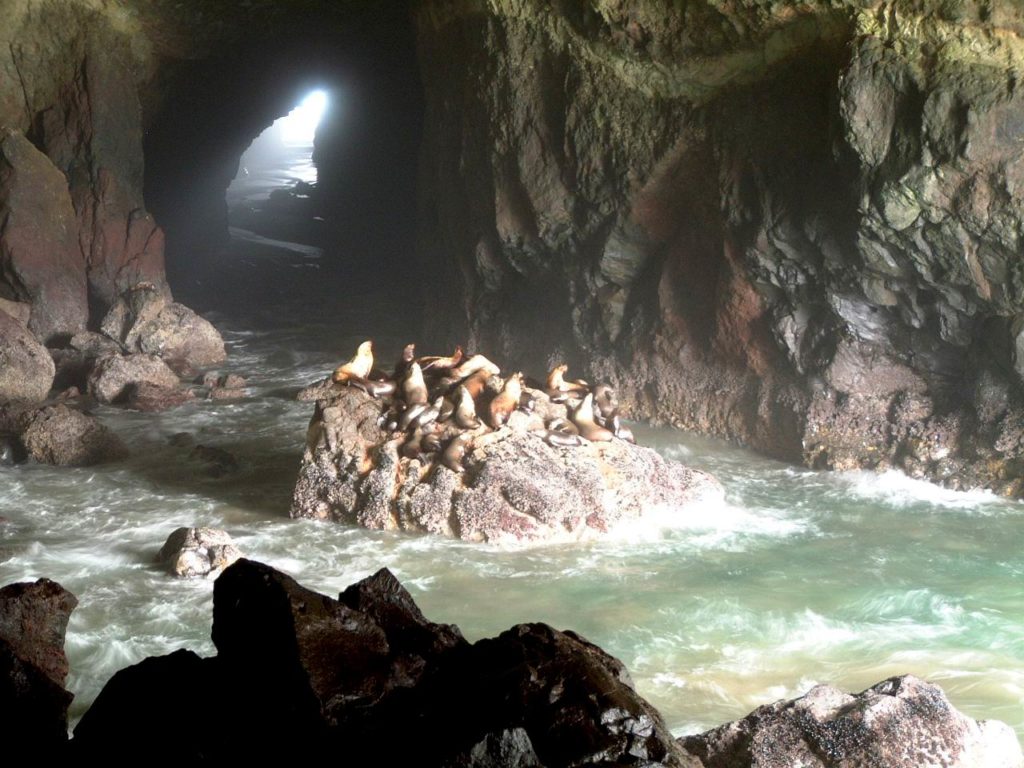 Oregon Dunes National Recreation Area– This 40 mile stretch of sand is one of the largest temperate coastal sand dunes in the world. There are many fun adventures to be had from surfing to cruising over the sand in a dune buggy.